0shares
Inspiration at times seems very late in coming. Especially when its with cooking in Microwave. My own event, Microwave Easy Cooking was basically to help us discover the wonders of cooking in Microwave and having more time on hand to do other things. But if you know how it goes, having those glass bowls handy is such a risky thing with kids being around all the time in the kitchen. I almost think my boys will learn cooking soon. They always want to be carried to see what’s getting cooked.
Like last night I was making dosas for them, while having the Idlis steamed for the rest of us. All of them wanted only dosa. In a week its almost 3 times that I give them dosa, still they only want it again. Anyway hubby dear was carrying Chinnu, he wanted to know what was on the stove. I lifted the lid and showed the pristine while idlis, he was so excited that he asked that for dinner too.
Coming back to the recipe on hand, I had planned on making the Mor Kali last night but kids refused to sleep before 10 and after that I was too tired to even think about making it. So got up early this morning and proceeded making it. Being in TN so long, I have heard and seen this eaten so often at friends place, though I have never made it myself. I even had the recipe written down, planning to make it in Microwave but never came around. What really surprised me that this never came to mind when Simran wanted to host breezy breakfast. Believe this Mor Kali is as breezy as it can get!

Cooking on stove, you got to be vigilant ensuring it doesn’t get burnt. You got to keep stirring it frequently. Even for the measurement I prepared, it was supposed to take more than 15 mints. But in MW, it just took about 6 mins. Imagine having your breakfast getting ready in 10 mins. Of course you need to have all ingredients on hand.

Also these are normally tempered with Red Chilies, but I used Mor Milagai, (Sun dried chilies soaked in curds/yogurt) for added taste

In a deep bottom bowl, add about a tsp of oil, drop in chilies, curry leaves along with Mustard and Urad dal. Stir well and micro for 1 min. If you think its needed, stir in between. End of the minute, my kitchen was filled with the wonderful aroma of sun dried chilies being fried along with curry leaves.

Take the curds/yogurt, add salt and beat well. Then add water to get thick butter milk.

In a bowl take rice flour and slowly add the buttermilk and mix well to get a lump less batter. The consistency can be more or less a dropping liquid .

Grease a square or rectangle microwave safe bowl with little oil. Pour the rice batter into it. Add the tempering to this batter and mix well.

Micro for 5 mins. In intervals of 2 mins, keep stirring. Once done, check if the kali is getting struck to the ladle.

Grease a bowl and transfer to it. Pat it well and unmold it for the click!

Notes: The curds/Yogurt I used wasn’t sour, Athamma felt had it been a bit more sour it would have been even more tasty! So maybe increase the curds used which can also be sour.

You have your breakfast ready? Hurry up today is the last day. Sending this Mor Kali to dear Simran, who is going to have quite a few dishes to help her out busy mornings!

Finally as things would always happen, I procrastinated making Rava Laddos for the Indian Cooking Challenge till the last moment. Though I had planned to make it with powdered semolina, ended up making the same way again!

Will be back with the round up of all Rava Laddoos made by the members! So watch out! 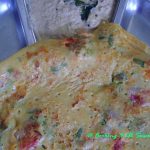 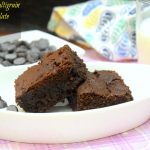 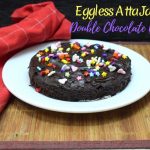