259shares
Offlate its been quite a hard time finding time to bake something. I had gone ahead announced Cakes Mela and I see myself unable to bake anything. So I have been planning to bake something and when I saw Harini posting this delicious looking cake, I had to make it right away.

Mine were more dense and soft, and I loved her cake’s texture. I simply followed the recipe without much change, though I wonder why the texture was not so crumbly as I found from her pictures. Anyway this is surely something I would want to make again. I simply find the Cinnamon aroma so tantalizing and gets you hooked. We were making the Sunday lunch and Amma was using the whole spice, just then putting in the cinnamon stick. I was measuring out the cinnamon powder and she commented it smells awesome. For a moment I didn’t notice the whole spice and we had a laugh saying Patta is cinnamon and I am sure the aroma is from the cake.

The ingredients are off the shelf, so you can easily make it if you are in want of indulging in an apple cake infused with cinnamon, that’s just so heavenly!

Peddu loved it and the cake was almost over before I could remove from pan, so you can see the loaf with almost done cake. Shift the flours together along with the spice powder. Next add raisins, salt and chopped apples.

In a separate bowl, mix sugar, oil, and yogurt until sugar is dissolved.

Pour the yogurt mixture into the flour mixture and stir until combined.

Pour the batter into the prepared pan.

After 25 mins, check by inserting a knife to see if it is done.

Let it cool and let the kids enjoy!

This is off for my Cakes Mela Sukhi Subzi Roll | How to make Roll with Mixed Vegetables 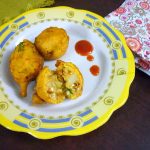