After a day at home, Monday always seem to have the blues attached, no matter what. They kids were up very late, so they refused to wake up on time. It become a big task, yelling, cajoling, threatening all the way to the bath and then grooming. Two little hung faces, and we steeled ourselves not to melt. Hubby dear has given them the ultimatum the Chutti TV is no longer going be featured. Well I got to wait and watch for that to happen. Meanwhile we just got to make sure they don't' get hooked to the TV again like that late night.

Breakfast was Masala Dosa, and it was a pleasing thing to note that Konda is now eating the Aloo Baji. I made the coconut chutney for her, but she happily ate the potato masala and said she loves it so much. I recently came to know in a hotel that she loves masala dosa. Whenever I make I have never seen her eating it. I guess that's Amma's influence in getting her used to it.

Coming to the recipe for today, it's going to be the Chicken Roast. Though the ground masala was pretty much the same as the Mutton Gravy, few other things were added to make it different. And the entire cooking done in the pan as chicken gets cooked pretty fast on pan. 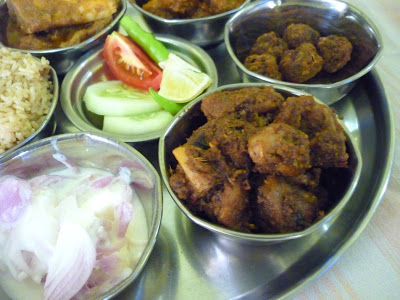 Add Curds to the chicken. Next add the Chicken Masala How to make the Chicken Roast:

Wash the chicken and cut into same size pieces. Drain it on a colander.

Have the Masala paste ready at hand.
Heat a non stick pan with oil, add onion julienne, green chilies. Saute well till onion turns colour.
Next add the ground masala and combine everything well. Cook on high for 5 mins. Now add the drained chicken and combine everything together and cook on high for 5 mins.
Then add chili powder, salt, coriander powder, turmeric powder. Mix well and cook on high, stirring at interval to make sure the bottom doesn't get burnt.
Once the oil starts coming out, add the curds, cook for couple of minutes. Then add chopped tomatoes.
Next goes the chicken masala powder, mint leaves. Continue cooking on high for the moisture to be all evaporated.
Add chopped coriander leaves and combine.
This takes about 30 mins for all the water to be evaporated and a thick gravy to coat the chicken pieces.
The dish has to be cooked on high for the moisture to be evaporated quickly.
Garnish again with coriander leaves.