0shares
The first in the Know your Ingredient Series is the Black-eyed pea or Alasandalu or Bobbarlu as we call in Telugu.

According to sources, this was originally native to Africa, but widely grown in many countries in Asia, the black-eyed pea was introduced into the West Indies and from there to the Southern United States, where it is still a widely used ingredient in soul food and Southern U.S. cuisine. The planting of crops of black-eyed peas was promoted by George Washington Carver both because, as a legume, it adds nitrogen to the soil and for its nutritional value.
Traditional use and Famous recipes across Globe

Black-eyed peas is a featured ingredient in the dish called Hoppin’ John. It is thought to bring good luck when served at New Years, so it is traditionally eaten on New Year’s Day in the American South and in some other parts of the country .

How these are available:

When purchasing dried black-eyed peas, choose shiny ones, and store them in an airtight container.

Dried peas can be soaked for 4 to 6 hrs before cooking them in pressure cooker. Other method to cook these super fast when you think on the moment, is dry roast them till they are brown and pressure cook when they are cool

*Disclaimer* Information given in this article, is sourced from Internet.

I would like to know more information on this pulse in terms of the Native Name and other interesting facts including the popular dishes prepared from this.

Once I get most information, I will post a summary of the finding.

Other names used to refer this :

and also just as Good Eats in English… :)) by Bee of Jungalbandi

Alasandala sambhar
Chawlichi bhaaji is served for lunch in pathare prabhu, (a maharahtrian community) weddings.
This is also used by Tamilians in their Velladai, Uppadai prepared for Karadayar nonbu, which I am told is celebrated on 14th or 15th of Feb.

Thanks for all your contribution.

Some interesting dishes made with Black Eyed Pea/ Alasandalu 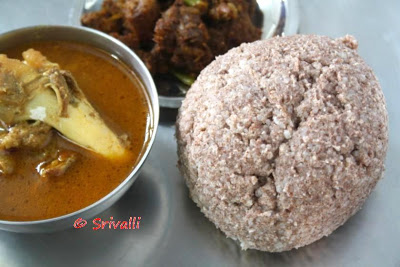 Kaai Kani Halwa ~ the grand finale in the Halwa series!