0 shares
With Sunday being the Tamil New Year, I wanted to make something special. Since I had to do Zarda, I decided to plan for some elaborate dishes, that naturally included Paneer. I think I made the best use of the Sunday, with cooking couple of dishes, keeping in view of our visit to my friends place. Kids were restless, wanting to leave on time, one thing was they wanted to see the babies, second was the movie that was going to be aired.
They managed to watch some of it at their place and then we hurried home to catch up the rest of the movie. I was almost not sure if I would have time to make the Somas and the Zarda, I had already made one traditional dish and kept it as backup. So I am glad I finally ended up making everything so that I have the backup dish for this series.

The vegetarian gravy that I made included peas and paneer, the deadly combo. However pairing it with Vegetable pulao was not a great idea. Hubby dear said I should have made Jeera Rice for this. Anyway this is something I would be making it again. Konda liked it very much and I made chapatis for her dinner for this.

The vada that's shared today is from Amma. It's another interesting usage of Cabbage into a fried vada. Seeing that I had Somas to offer, hubby dear refused to taste Zarda, saying he doesn't like tutti fruiti. I said he had to taste as I had to post it for ICC.  Well that's one statement he never says no, especially when a new dish needs his approval, he is quite agreeing to the whole exercise. I had no issues with Somas, as the entire batch was almost over by the time I was done with the clicks. Please don't ask me what Lababdar means, the recipe I had stored had the name, though I had changed a lot in the given recipe!

Following from last week, I am joined by Champa and Vaishali who have shared their Weekend Cooking with me. Hop on and enjoy! Champa has made some delicious looking sweet dish called the Hayagreeva and Vaishali was smart to share Zarda! What was surprising was that I had only recently read about Hayagreeva and wanted to know how it looks. By looking at Champa's bowl, I am really tempted. About Vaishali's Zarda, of course she is a master when it comes to decoration and presentation. You will have no choice but to drool over both the dishes!

How to make the Mata Paner Lababdar

Heat the oil add onions and saute till it turns colour, then add ginger garlic paste. Cook till both turns to a nice colour.

Add the fresh peas and simmer.

Grind both poppy seeds and melon seeds to a fine powder.

Now add all the spice powders along with poppy seed powder, mix well.

Add water and bring to boil. When the gravy thickens, add paneer cubes. Finally add the fresh cream and simmer for 5 mins.

Garnish with coriander leaves and switch off.

You can garnish with roasted almond slivers,Serve hot, garnished with coriander and almonds.

How to make the Vada

Soak the moong dal for 30 mins, finely shred the cabbage and keep it aside.

Grind the moong dal to a fine paste. Grind ginger and green chilies to a paste.

Heat a pan with oil, when it is hot, pat down the batter as vadas and deep fry on both sides.

Drain the vada on to a kitchen towel.

Zarda ~ Sweet Saffron Rice from Kashmir
Enjoy the week ahead! 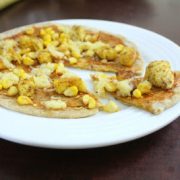