I know Snack Mela round up is way too delayed. I lost the list and had to work on it completely again. Never realized it will get so late to do the round up. However, I thoroughly enjoyed going through the entries. I am sure all the 180 entries will come so handy when you are in need of ideas for Snacks.

Making it as a two part round up to make sure all the entries gets properly checked out. Please excuse the picture collage as I had to do the list that was finally left out.

And finally from me, Eggless Carrot Cake and MW Eggless Chocolate Cake

Then we have some delicious Chats making our way!

And then from me a Wafer Chat

Ok now for some tempting deep fried snacks or very close to them!

And finally from Vardhini, a Low fat Thayir Vadai 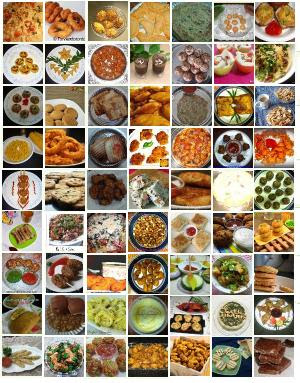 Now comes some light tiffins if you want!

And finally for some sweet offerings...