Its been nearly 3 weeks since I got back to this series. Basically its because I found I wasn't doing anything other than Sambar with the same set of vegetables along with dry curries with the same set of vegetables or dals with fries with the same few vegetables... *yawn*. I wonder why its become so monotonous! It wasn't like this some months back. Then I used to make Sambar only twice a week for lunch, now its almost like every other day we are having it. I wonder what I was cooking on the other days! I think its high time I plan my menus as I used to do. But god kiddos have become more naughty! Went home last evening, to see both of them have not eaten their evening meal. I believe both refused and Athamma was in ends of her thither to make them eat. Elder one wanted me to carry him, I said please atleast give me time to wash my hands. He shook his head to say no no. I convinced the nanny to take him out. The younger one was running around, so took the bowl to him and he waves his hand to say he doesn't want! My younger one is so smart. He understands every word we say. The other day after switching off the lights, I was asking Konda to get me a pillow, suddenly I was showered with pillows. When I saw who it was, I really so surprised. Chinnu got up to get two pillows and threw on me. Ask for one, you get many! Amma was trying to reach us and the phone I believe was going on ringing without any answer. She was wondering what happened. Well nothing, her two little cubs found the telephone instrument very appealing, so its they plaything now!

So unconsciously before leaving for my vacation, I posted something else on Friday. Only on thinking back I realised that I was supposed to post LBS!. Well visiting my parents ensured I have a change in this series. Dad doesn't like rice to be packed for lunch. Infact his dabba is so small, more like my daughter's. Everyday whatever Amma sends, he will come back home and complain that she had packed him more. So finally she decided that chappatis are the best for him. He will not have much excuse to say it was too much. Since few years its been chappatis for him with Subjis. Since I was cooking this time, wanted to make something dramatic, but Amma decided on a much simpler dish and warned me that if I am to send more, then I will get properly back in the evening!

So, here comes a change to this series in form of chappatis, showcasing my Dad's lunchbox with just rotis along with subjis. No rasam or curd rice for him, he would prefer to spend that extra time looking after his patients! 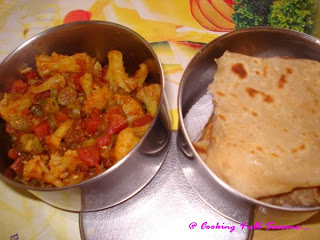 Cut all the vegetables to 1 inch size. Clean the cauliflower and split into florets. Soak in warm water along with salt.

Drain the water from cauliflower and pressure cook all the vegetables for 1 whistle.

Chop the onions and tomatoes. If you have roasted cumin seeds, its fine. Else dry roast the cumin and powder it when its cool.

Heat a pan with oil. Add onions and fry till its brown. Then add in tomatoes. Cook till its soft and mashy. Add chilli pw, coriander pw and turmeric pw along with salt. Cook for 2 mins.

Once done add in the cooked vergetables. Cook on high and sprinkle the roasted cumin and garam masala. Add little water to make it soft and all the masalas to get mixed. Finally add the coriander leaves.

Note: The roasted cumin powder is something thats always ready. But fresh powder adds more flavour!
This can be sukhi or dry curry too, but by afternoon it might be little hard to eat, so little water is added.