0shares
After the stuffed bajjis that Konda liked a lot, Peddu wanted some for himself. Though seeing the chillies he said he wanted something else. That’s when I remembered that he used to love bondas as a kid and wanted to make the stuffing as bondas. When the boys were 2 & 1/2 or so, we had taken them to Tirupati along with my sis in laws family. Over there while we had gone for darshan, my bil had taken the kids for snacks. That’s when they saw the bondas they wanted to eat that. In fact they ate and even after coming back home, they kept asking for bondas. So if I wanted the boys to eat something I normally resort to making them as bondas and telling them it’s the same they ate at Tirupati.
Truth be said, these stuffed fritters were really awesome. Of course there is no denying that deep fried snack tends to be very delicious.

Prepare the stuffing as it was in Stuffed Chilli Bajji and the outer layer too.Then to the stuffing, add in 2-3 bread slices soaked in water and squeezed out completely. Crumble this mix with the stuffing and combine everything to a stiff balls.Dip the balls in the batter and deep fry them right away.

This goes for my Snack Mela, which is on till the end of the month.

And to my Kid’s Delight, hosted by Veena this month themed on colourful palette 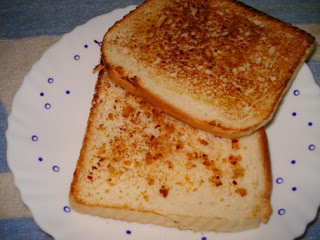 Microwave Easy Cooking with all Bottled - Round up and next Theme!