The memories of a Cooking Marathon!

0shares
Challenges are something I can rarely resist and that’s exactly what I took upon myself along with my colleagues. For our company’s anniversary, we were asked if we would like to cook the lunch for the entire company. We readily agreed as it was sounding so exciting and I really wanted to see if I can scale upto it! It was barely 10 days before and the cooking committee as we called ourselves, met and requested volunteers. Another dozen came forward, we met to get their thoughts on the menu. We agreed at a menu and formed teams which would handle the individual dishes. We later saw that the menu was almost the usual ones.

We had plans on including one dish from each Indian cuisine. We finally decided we would choose dishes that I will be able to scale up easily. I didn’t want to risk making something entirely new, so choose the dishes from my blog naturally. While I was discussing the menu with hubby dear, on hearing the menu, he teased me saying in the end you can say for clarification visit our blog!

Initial on the list were Veg Cutlets, Paneer Butter Masala, Channa Masala, Veg Pulao, Mango Lassi along with few more dishes. So we had it changed to Assorted Veg Fries along with Paneer in the same way I make Onion Fries. Dal Makhani with Masala Puri, Coconut Puloa with Gutti Vankaya. Finally to be served with Chocolate Milkshake with Chocolate shavings, Konda’s favorite!

All of us were so excited with the menu. But there were some apprehensive thoughts on the Coconut Pulao. So I even had a mock session with Coconut Pulao and Gutti Vanakaya as these are traditional Andhra dishes. Well the fact that the lunch box was wiped clean proved it to be a hit combo. The entire lunch planning was handled just like any other projects we do. But I seriously realized it requires more project management skills!

I was eternally tensed wondering if the quantity would suffice. I wrote down the list and quantity and iterated with Amma couple of times. We literally walked through the list, taking examples of how we cook and how much is needed. Amma usually never goes wrong with scaling up to huge numbers. She was happy that I have at least some of her skills. I was more elated when she finally said “very good ra, you got the quantities correct!” I felt like a 5 yr old being patted on getting the Maths right!

We had the list allocated to different people responsible for getting them together. Amma was most particular that we buy the raw peanuts and roast it at home. She infact offered to roast the Poppy seeds and Sesame seeds for the Gutti Vankaya. Since it was her specialty dish, I knew how much particular she was on getting it rightly! I had all the dry masalas all ground the previous day. I can imagine the hard work the people have to handle when they are catering to huge crowd!

The previous day I ran through the entire list of ingredients we needed. 7 Kgs of rice, 7 kgs of Atta, 20 lits of milk, 3 Hershey’s Chocolate Sauce bottles, 1500 gms of Chocolates, 10 kgs of Onions, 10 kgs of Tomatoes, plus 1001 different ingredients. We had the milk boiled and sweetened the previous day and it went into the cooler. Since I was making the Brinjal Curry more like a Nune Vankaya, we had the brinjals all washed and dried.

We met the team the previous day and went through the entire process again. The team that was assigned to make the Veg fries, said they don’t know how its prepared. I assured them that we can handle it. All of us planned an early start. As things would usually happen, I couldn’t sleep the entire night, Peddu was having a running nose and wouldn’t just sleep. As I had to prepare lunch for the boys. I was up early. But I had a great relief hearing that Konda was having a day off and I need not worry about getting her ready for school.

Hubby dear kept the boys busy while I was getting ready to leave. I thought I would slip off without the boys noticing me, but Peddu saw me and asked where I was off too. He asked if I was going to “oppice”, on nodding yes, he called me close to give me a peck on the checks. Oh Sweet! I didn’t need any more wishes for a sweeter success!

At office, I was happy to note the work was already on the way. By the time the entire team landed, we were in full swing. What a team work it was! Each and everybody, though some were novice in their experience, helped a lot in getting things done fast. We were dot on time as planned, which cheered us all a lot. Everybody were running around between the two rooms that were occupied.

We sent our helps up and down couple of times with last minute requests. I had a quick running around to check on each teams making the Veg fries and Masala Pooris. After okaying the proportions, the poori team rolled out a stupendous number of nearly 300+ puris. Since the team had few beginners learning, some came out as churis but on the whole those were really some awesome pooris I must say! Each and every dish had a roaring applause and everybody said they eat more than what they normally do.

The top most sold out dish was naturally the Chocolate Milkshake with Chocolate Shavings. Would you believe it was such a hit that it never got captured in any of the pictures!!! I normally beat it in a mixer, but this time added condensed milk to make it thicker which naturally enhanced the taste. In the end we used a blender to get everything set. Finally the chilled milkshake was topped with Chocolate Sauce and Chocolate Shavings. It was whipped out completely when the last few not getting their share. And most of the cooking team not even tasting it. I had to make it again in the evening. After all after working so hard for the event, they can’t be missed on their dessert right!

The next one was Veg fries, with corn flour, besan, amchur and seasonings, all deep fried. There was no dispute to this being a favorite one! We added Potatoes, Okra, Onions, Baby Corns, Cauliflowers and Paneer! Of course no feast is complete without Paneer right and we had a our share of Paneer fans.

All the dishes came out exceptionally well. Yeah except Coconut Pulao. I had a mishap with this, though we finally had a saving grace somehow. I planned to make it the usual way I do, but later realized that when cooking for more people, the method adapted has to be different! I normally roast the rice and then add water. But since the vessel was huge, it got heated up the moment it was on. and however much of coconut milk I was adding it was getting evaporated and I couldn’t find water handy. Finally I managed to add enough water to get it cooked. But it wasn’t the finer coconut pulao that normally gets done. But I guess with Gutti Vankaya and Dal Makhani being so exceptionally good, this sad state of Coconut Pulao was not noticed! or so I concluded.

Our colleagues made us feel proud by going in for second and some third helpings too!

Would I do it again? Yes surely its such a different experience seeing people flocking around the table and coming back for a second helping. Feeling good eating a good feast! And yes if I am lucky to have such a team doing everything that’s not assigned to them, with the sole intention for the day to be a success! Some felt we were crazy but I can only remember Amma telling me that this would be such a wonderful learning experience for me! After all challenges are meant to be that right! 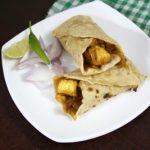